Tony’s passion for good quality food and hospitality traces back to his roots in Faeto, Italy where he was born. His parents, along with his 5 siblings, immigrated to the US in 1969. With their hard-working, humble beginnings, Tony
was heavily influenced by his mother, Maria’s home cooking. He learned that quality food demanded fresh, quality ingredients. Tony became the owner of an Italian restaurant where his passion for food preparation grew into not only recreating many of his mother’s recipes, but to the creation of many of his own signature dishes.  As customers began ordering his entrees for outside events, thus was the birth of his catering. With the enormous success of his catering, Tony decided to leave the restaurant business to found Gallucci's Catering in 2013. 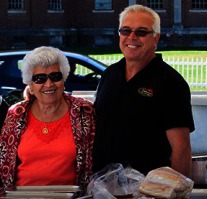 Tony and his mother, Maria, at the annual Newtown Arts Festival

My first time ever using a caterer, and I could not be happier. I hosted a bridal shower for 50 people, and Tony made planning the event's food incredibly easy. On the day of the event, the 2 servers he assigned to my event came early, worked hard, served beautifully and left me a spotless kitchen - they were awesome. But, most important the food they served not only looked beautiful but was absolutely delicious. All my guests were very impressed, and I just want to pass along all their compliments. They made it so easy for me to be a guest at my own party. My husband and I highly recommend Gallucci's Catering.